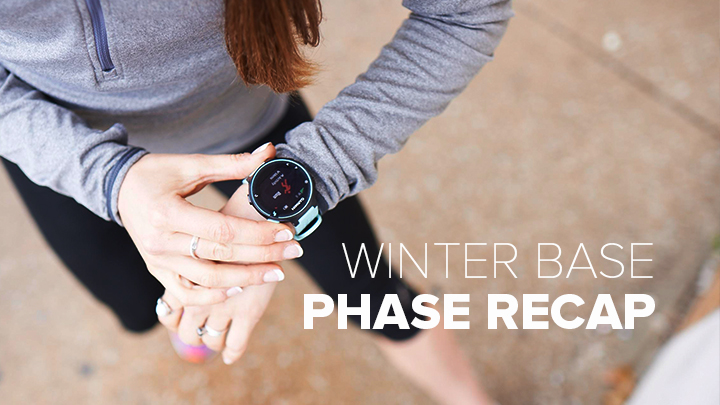 Where has the time gone! Last time I wrote about my running I was a week out from wrapping up my winter base phase. I survived my last 70 mile week and topped it off with a monster 11 mile marathon paced tempo/long run pacing a couple friends who are training for Boston. I’ve never run a tempo like that even for my own marathon training in the past and the fact that if felt relaxed and controlled was a huge confidence boost that really showed me how some of my training changes have paid off. As I mentioned in my last post, long runs and tempos have always been my weakness and this last year I got fed up with failing at them. So I tackled the issue, working hard to improve my aerobic base and endurance. Here’s how I went about it.

What is your aerobic energy system?

To preface, let’s break down what your aerobic energy system is. Aerobic means “with oxygen”. In aerobic activity, oxygen is the catalyst for the chemical reactions going on in your muscles the generate the power and energy that propells you through workouts. The body’s energy demands are balanced by its energy supply (fuel) and the goal in building an aerobic base is to increase the efficiency of your body’s energy demands. The end result of this efficiency is being able to do more with less stress on your body and reaching higher fitness goals due to improved recovery. Whatever sport you participate in, aerobic strength is vital for performance and improvement and should be the foundation of all training programs.

Why Runners Need Base Phases?

I’ve been a high mileage runner my whole life, why would I need to work on aerobic base? Yes, I have a monster aerobic base compared to just anyone off the street but my fitness had plateaued, my workouts were flat and I could tell my body was not operating efficiently and healing itself like it should. Distance runners, especially ones that race a lot can always benefit from planning an intentional offseason followed by a base phase that allows them to regenerate their glycogen stores, rest their bodies and build an improved aerobic energy system. I learned the hard way by going nonstop without one for 3 years which led to a lot of lackluster races, burnouts and nagging injuries. Learn from my mistakes and do it the right way.

Here’s what my journey to a better aerobic base looked like:

In college and in the first few years out I doubled on my runs almost daily. My goal was usually to get 10 miles in a day and I’d split it up 4/6 or 5/5. I’d do workouts that were a bit longer and struggled to run a 90 min long run each week. Earlier this spring I moved into the city and was limited to hilly routes for most of my training. My legs were wrecked from it. I was still trying to go out twice a day and my runs got slower and I dreaded workouts. The only thing on my mind was HIT THAT MILEAGE…Bad motto when you’re about to bonk. My husband, who has over a decade of coaching experience, had been telling me for awhile that I needed to quit doing so many slow junk miles and focus on longer periods of time between my runs so I could adjust and acclimate. In April I made the shift to singles and it has changed me as a runner.

Initially to accomplish longer single runs I had to back the mileage way off. My goal the first few weeks was to just hit 45 miles which was nearly 20 miles off of what I was use to hitting. All those longer runs kicked my butt at first but I started to noticed that longer breaks in between workouts dramatically improved how I recovered and my motivation towards training. 6 months later I had worked my mileage back to mid 60’s on singles and PRed in longer races in the fall due to mental strength I gained from longer runs and increased aerobic strength.

Though I had a successful fall racing season, it still had been years since I’d taken a break from workouts. I have never been seriously injured (knock on wood) so there were no forced breaks and I always got caught up in the hype of racing year round. As badly as I wanted to kill some indoor track this year, I took a solid 6 weeks to focus on just running miles and improving efficiency. I started the week after USATF Club Cross Country where I had a pretty flat race reinforcing again my need to take it easy. For an entire 6 weeks all I did was run relaxed miles complimented by a few picks or tempo miles when my body felt like it. I worked in a few doubles a week in the form of either another run, swimming or strength training. By the end I was mentally and physically rested and ready to build workouts on top of my base.

The First 4 Weeks of Spring Training

I wasted no time in jumping back onto the track the week after base ended. I started conservatively with 6x800m at just under 6 min pace. It felt weird..like I had baby deer legs walking for the first time. The purpose of the workout was to reintroduce my legs to faster paces and keep building my aerobic energy system through a relatively steady state workout.

Week 2 went way better and I actually felt like an athlete again. The workout was another steady state, 16x400m with 100m jog in between. I started at 88’s and got into a very comfortable groove ticking off 84’s for the last 8. I followed that up with a 2×2 mile tempo Friday night. I always way underestimate what I can hit on tempo runs. We averaged 6:18’s going up a hill for the first 2 miles, 3 min jog, then tore down the hill in 6:03’s.

In week 3 I decided to jump in a indoor 5k since my husband was doing it and I needed a tempo effort on Friday. I didn’t ease up in training during the week and did a track workout cut down of 2×1 mile, 800, 400, 200 a few days before. Those shorter quicker intervals definitely had me walking funny the next day. I ran an 18:21 for the 5k going out with the pack in the fast heat in just under 5:40. I have no experience with 300 meter tracks and had not concept of my pace..I knew it was going to hurt but tried to toughen up as much as possible. My last mile was rough but it topped off another good training week.

Week 4 (last week) my calves were still beat up from racing in spikes and my legs were not 100% better from a Friday night race/Sat AM long run. We did 16x200m hills – a good workout for when you don’t want to focus on paces. I had an ambitious 3, 2, 1 mile tempo scheduled for Friday night but 20mph wind gusts and a crazy work week made me postpone it until Saturday morning. The goal was to do it in the middle of my long run. I warmed up 3 miles and went right into the 3 mile tempo. That portion went well but was a little too fast. I had some fueling issues (started blacking out a bit) in the 2 mile portion and called it a day after 1.25. I’m planning on trying it again this week.

Anyways, that was a long-winded way of saying training is going well and I’m enjoying it more than ever, especially in the gorgeous weather KC has been handing us. My next run is the Big 12 Run on March 11th, one of best spring races in Kansas City. Happy running!

Join the discussion and tell us your opinion.

Hey Lindsey. Great track race! Are you thinking of the 12k or 5k in at the run this weekend?